Do you know how many slaves are in the world? 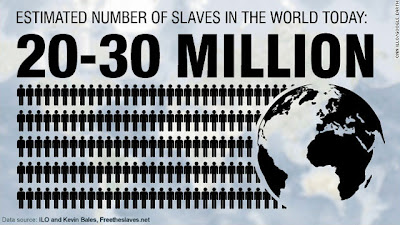 According to a post by The CNN Freedom Project, there are an estimated 20 - 30 million slaves in the world. The number of people working in forced labor conditions seems to be increasing over the years, not
decreasing.  A new study from the International Labor Organization has estimated about 21 million people are now in forced labor. These numbers by the ILO are a significant increase from the minimum estimation of 12.3 millions enslaved persons in 2005. It is important to note that it is not possible to get an exact number of people enslaved in the world asmany experts have different research methods to gather information. In a news release, ILO stated that of the "20.9 million globally in forced labor, 4.5 million were sexually exploited and 14.2 million were exploited in industries such as construction and agriculture."  The numbers presented by the ILO suggest that 11.7 million forced labors come from the Asia-Pacific region, making them the largest region of forced labor, and Africa the second highest at 3.7 million. In a statement by Beate Andrees, head of the ILO's Special Action Programme to Combat Forced Labour, she said  "We have come a long way over the last seven years since we first put an estimate on how many people were forced into labor or services across the world." She continued by saying "We have made good progress in ensuring most countries now have legislation in place which criminalizes forced labor, human trafficking and slavery-like practices."

- Written by Jasmine London
Posted by Elyse Elder at 4:38 PM