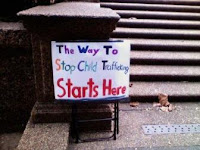 No city, state or country is immune to the plague of modern slavery, not even our nation’s capital.
DC Trafficking Facts:
September is Washington D.C.’s Human Trafficking Awareness Month, the event that was established thanks to the efforts of the D.C. Task Force on Human Trafficking. The Task Force was established in 2004 with the D.C. police department and the U.S. Attorney’s office, membership is now open to open to any D.C. metropolitan area law enforcement agency or non-governmental organization involved in anti-trafficking activities.