The Reality of Organ Trafficking 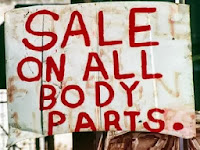 Americans are obsessed with health. We burn fat and sweat toxins out with the latest exercise videos, and fitness gyms are an institution. Yet despite our best efforts, our bodies eventually age and begin to fall apart. The health issues many Americans are faced with are diabetes or high blood pressure, both of which are among the biggest causes of kidney failure in America. Kidney problems often lead to dialysis and ultimately the need for a transplant.

As of October 25, 98,463 people in the United States were waiting for a kidney transplant while only 16,500 transplants have been performed this year. Compounding the shortage of organs, a new name is added to the transplant list every 10 minutes. Those who cannot receive a kidney have three options: ongoing dialysis, death or the black market for organs.

With the exception of Iran, all counties have ruled the act of paying an organ donor as illegal. Nevertheless, when their own lives or the lives of loved ones are on the line, 75% of people would consider paying someone for a kidney . The grim realization is that often, they have no problems finding people who would help them. In 2009, for example, a Brooklyn businessman was accused of trying to sell a kidney for $160,000. In June 2012, a Serbian man tried to sell his kidney for nearly $40,000 on the Internet after losing his job. Considering the aforementioned examples, it seems sadly inevitable that desperation breeds profit.

The sources of the organs do not have to be volunteers and indeed often are not. In China, executed prisoners have been the source of transplants for years. Indeed, estimates reveals that the majority of organs needed for transplants have traditionally come from executed prisoners. Cultural biases against the removal of organs after death make it hard to establish a completely voluntary process. The big gap between demand and supply maintains the Chinese government's practice of obtaining organs for transplants from executed prisoners. Various human rights organizations have reported that China executes more prisoners than any other nation and questions arise as to whether the executions are really a form of justice or whether they simply address the problem of not enough organ donors. The lack of donors has also fueled a thriving black market in trafficking organs.

A similarly big issue is the growth of transplant tourism around the world and the resulting booming business of organ trafficking. Medieaseindia provides many services including kidney transplants at relatively inexpensive prices. Compare their $18,000 cost to the $60,000 price tag in the United States and it is easy to understand the allure of traveling abroad for a chance to life. On the sellers' side, poverty contributes greatly to one's likelihood to sell an organ, specifically kidneys. The problem arises when many of the "volunteers" interested in selling an organ to save another person's life are found not to actually be volunteers.

According to the World Health Organization (WHO), the commercialization of human organs is "a violation of human rights and human dignities". In addition, the UN Protocol to Prevent, Suppress and Punish Trafficking in Persons emphasizes that the trafficking of persons for the specific purpose of organ removal falls under the definition of human trafficking. Organ trafficking, therefore, is a serious issue that demands the attention of local, state and international authorities. The crime takes place in the form of three broad categories: 1) traffickers force or coerce vulnerable people to "donate" an organ; 2) vulnerable people volunteer to sell an organ but are subsequently deceived by traffickers and receive no payment or less than what was promised; and 3) vulnerable people are brought in for treatment and have their organs removed without consent or knowledge (UN GIFT, 2013).

To understand the intricacies of the crime of organ trafficking, we recommend watching the Tales from the Organ Trade, an HBO documentary exploring all aspects of the problem. Although the known number of organ trafficking victims is relatively small, that is precisely why we must attack the issue now. With increased research and legal oversight, we can address the roots of the problem before it spirals out of control. Surely the lives of both sick and healthy people are worth our engagement.

Posted by Krasi Shapkarova at 9:45 PM