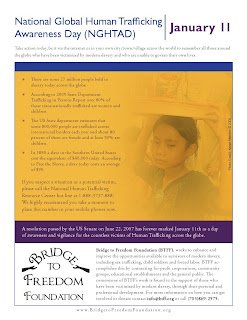 Yesterday was National Global Human Trafficking Awareness Day (NGHTAD) and the buzz against human trafficking was all about. E-mails and 24 hour campaigns were bustling around the Internet, while Facebook was exploding with chatter on what one could do on the day to promote the day.  People across the country were sharing resources and information on how to become more aware, and what one could do to be involved in the global fight to see an end to the enslavement of some 27 million men, women and children who are held by the chains of modern slavery.

However what I want to stress most about NGHTAD, is that this is not a day to be aware, but to get aware, stay aware and act! I hope that people took today, and this national awareness month to learn some of the facts, look into resources, but most of all take tomorrow and thereafter to use them. Sure having a nationally recognized awareness day is great, but it is useless if it just sits there on the books and the only ones shouting from the rooftops about human trafficking/modern slavery, are those who are already standing on the front lines. I can write, type, talk and shout till my fingers go numb and my lungs go dry, but it’s all useless if no one is on the other side listening and learning. 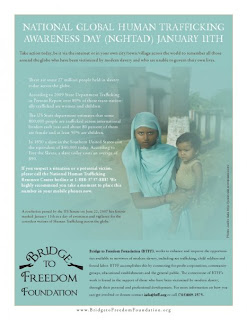 True, an awareness day and awareness month, is great but for those of us in the field every day, every month, every year, is a National and Global Human Trafficking Awareness day. Did I talk more about trafficking today than any other day, yes and no! Sure, I used the day as an opener to talk to people I came across at every corner; the metro, my martial arts studio, cafe, CVS, etc. and I posted flyers everywhere I could, blogged, twittered, and facebooked away every second I could. Therefore while it seems like I was non-stop, and I was publicly so to speak, as were so many others in the field, but the reality is that most of us are non-stop every day. I am famed for my 4am bedtimes, and all too often have had a colleague at another organization say, “You should have called me I was up”, while another is constantly yelling at me that I need to get my rest so we can win this fight as it will take all of us and we need our strength. Thus weather you hear the voices of activist on the front line or not, they are there and they are strong.  Nonetheless the harsh reality is there are far fewer of us than there are victims and survivors to assist. It is for this reason that it is so vital that the fight to combat modern slavery is not that of a day, nor that of a month, but a year long global fight by each and every local and global citizen, that will not end until each victim is rescued and every survivor is in a sustainable and thriving life. It is a long hard road, but it is a fight we can win if we unite to do so.  We all have a role to play…the end to modern slavery is a giant puzzle, and each one of us holds a piece to that puzzle…the puzzle of freedom!

What can you do?

It takes all of us to build the bridge to freedom!
Posted by Cassandra Clifford, Executive Director and Founder at 10:33 AM