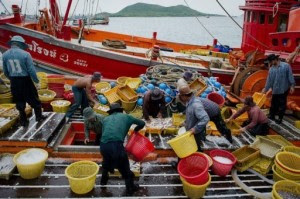 According to a leading human rights expert, “[h]uman trafficking in Cambodia and Thailand is no longer limited to women and children…[p]oor farmers in Cambodia are convinced to leave home on the promise of better work in Thailand. Many are finding themselves on long-haul trawlers in the South China Sea and forced to work against their will.”

Taing Ky* and his cousin were recruited to make “good money” as gardeners in Thailand, but they found themselves forced to work on Thai fishing boats in the South China Sea. Taing Ky is a native Cambodian and father of five. After six months of torture, enslavement, and deplorable working conditions, he and his cousin managed to escape while their boat was offloading on Benjina island in northern Indonesia.

It’s estimated that thousands of Cambodian, Thai, and Burmese men are presently enslaved on long-haul trawlers, far beyond the reach of law enforcement officials. "It's slavery. There's no other way to describe it," Lim Tith, national project coordinator for the UN Inter-Agency Project on Human Trafficking (UNIAP), told IRIN

According to an IRIN report, “[t]hose lucky enough to escape report 20-hour work days, food deprivation, regular beatings and threats at the hands of the crew, many of whom are armed…So bad are conditions that those deemed expendable are tossed overboard.” One survivor stated that “The captain had a gun. We had no choice but to work.”

Recently, Joy Ngozi Ezeilo, the UN Special Rapporteur on Trafficking in Persons, Especially Women and Children, urged the Thai government to "do more to combat human trafficking effectively and protect the rights of migrant workers who are increasingly vulnerable to forced and exploitative labour.” "Thailand faces significant challenges as a source, transit and destination country," said the UN expert at the end of her 12-day mission to the country. "The trend of trafficking for forced labour is growing in scale in the agricultural, construction and fishing industries," she said.

When these crimes occur on fishing boats located outside Thai waters, there’s very little that Thai authorities can do to help the trafficked workers; and therefore, the Thai and Cambodian governments must take stronger action to effectively combat human trafficking.