Fact: A Pimp is not "Cool", they are a Human Trafficker 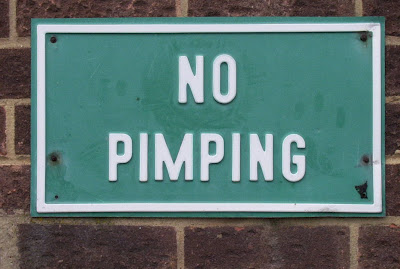 According to Websters Dictionary a Pimp is defined as. "a man who solicits clients for a prostitute." The words "pimp" and "pimping" have been noted in much of popular culture as cool and hip as they are glamorized via music, movies, novelty items, popular literature and media as "cool". Pimps, are not cool, they are human traffickers/modern slave owners and buyers.

As defined in the Trafficking Victims Protection Act (TVPRA), sex trafficking is a crime in which a commercial sex act is induced by either force, fraud, or coercion. Pimps sell women, girls and boys for commercial sexual use and exploitation, using them as a disposable commodity. These traffickers use a number of various ways to gain control over both the body and mind of their victims. Many of these factors directly meet the definitions of force, fraud, or coercion placed within the TVPRA. A pimp will lure a child with various items,promises, and a sense of security, including; food, clothes, positive attention, friendship, love (romantic or that of a father figure), and place to stay - all of which seem safe and real. The pimp develops a relationship creating a false sense of trust with their victims and then engaging them into forced prostitution.

Pimps are violent traffickers that coerce, physically and mental abuse and even brand young children...they are not someone to idolize or emulate, they deserve no respect or glamorization, -they deserve to be imprisoned for the crimes they have and continue to commit.
Posted by Cassandra Clifford, Executive Director and Founder at 3:54 PM