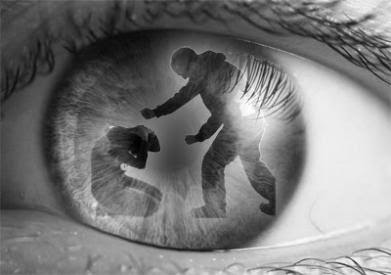 As we quickly roll into November and the holiday season, we remember October for a number of reasons; however, one important one is often forgotten. October was Domestic Awareness Month in the United States, but the purple ribbons — representing courage, survival, honor and dedication to ending domestic violence — were over shadowed by the flood of pink for Breast Cancer, which shares October as an awareness month. Undoubtedly both causes are worthy, but the uncontrollable plague of cancer seems to be easier to digest with the mainstream public and no one — not even NFL players — are afraid to wear pink all year long in support. Domestic violence is preventable, and it’s victims are more than just the wives of abusive spouses, but their children. So where was the purple?

Four million women are victimized by domestic violence every year, and three women die from abuse each year. Women and girls aged 16-24 are the most vulnerable, but violence affects Americans — as well as their international counterparts — regardless of gender, age, income, sexual orientation, race or religion. Victims of domestic violence are often also victims of modern slavery/human trafficking, via sex trafficking and forced marriages. The plague of domestic violence in the U.S. affects a woman or girl every nine seconds as a woman is assaulted physically and/or sexually. The most shocking fact about domestic violence is that most of these incidents/assaults are never reported. The reporting of domestic violence has continued to decrease even more in times of economic hardship because women so often stay with their abusive partner for financial sustenance in addition to fear and feel they do not have the needed resources to escape their abusers.

Although the numbers of those in situations of domestic violence are shocking in the U.S., these victims are not alone. Domestic violence has become seemingly a global plague, studies show that between one quarter and one half of all women in the world have been abused by intimate partners. The World Health Organization (WHO) reported that in 48 surveys from around the world, 10-69% of women stated that they had been physically assaulted by an intimate partner at some point in their lives. The WHO also reports that studies from a range of countries show that 40-70% of female murder victims were killed by an intimate partner.

To read the rest of this post by Bridge to Freedom Foundation Executive Director and Founder, Cassandra Clifford please click here to go to the Foreign Policy Association, where you will learn more about the links between domestic violence and modern day slavery.

Posted by Cassandra Clifford, Executive Director and Founder at 2:32 PM