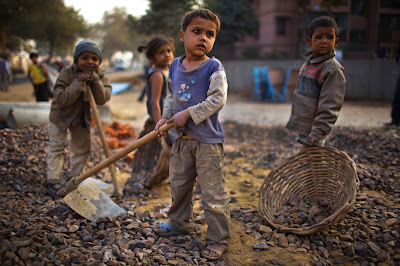 Every year on June 12th we draw attention to the tragedy of child labor through the World Day Against Child Labor. According to a recent survey, there are some 215 million children who are being exploited and therefore being denied an education and a childhood. Check out an excerpt of what BTFF's Executive Director, Cassandra Clifford, has to say about it:

"According to the International Labor Organization’s (ILO) most recent estimate, some 215 million children, 127 million boys and 88 million girls, are in situations of child labor exploitation. UNICEF places 16 percent of children between the ages of 5 and 14 years old living in developing countries in forms of child labor, and in the least developed countries the number almost doubles to 29 percent overall, while Sub-Saharan Africa has the highest rates of child labor at 33 percent."


"These children are often forced to work long hours, which is often in harsh and dangerous conditions. Child labor has a direct link to poverty, and provides a substantial barrier to a child’s education…thus enabling a barrier to a child’s education and increasing the literacy gap. Education is often taken for granted in developing nations, however many poor and impoverished families are forced to face the choose to send their child to school or work to help the family…it is that choice that has sent millions of children out of the classroom, often disparagingly girls, to toil in fields, factories, homes and the streets."