In 1959, when China's Communist Party Liberation Army invaded Tibet, no family was left untouched.  Other than the very old and the very young, the majority of the Tibetan population was arrested at one moment or another.  Either for owning a picture of the Dalai Lama, or participating in peaceful protests, Tibetans have been, and continue to be, arrested, subject to hard labor and torture and even death.  Out of the 6 million people living in Tibet, 1.2 million have died as a result of their time within the Chinese Laogai prison system.  On Friday, June 8th, BTFF had the privilege to attend the Laogai Foundation's Conference on the sufferings of the Tibetan people in Chinese prisons.  We heard passionate speeches by Representatives Chris Smith and Frank Wolf, both of who have visited these prisons and their appalling practices, and the representative of the Dalai Lama.  However, perhaps the most moving part of the three-day event were the testimonies by seven survivors who were eventually released from the Laogai prisons and finally escaped from China's authoritative rule.  Here are excerpts from just a couple stories heard: 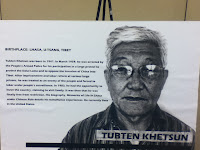 Thupten Khetsun is now 70 years old, but in 1959 at least five of his family members, including himself, were arrested.  While his mother was subject to political "reeducation" outside of confinment, Khetsun was placed into Drapchi prison for two years.  He and other political prisoners were required to either break open large stones or make bricks while only sustaining on barley soup.  "While I was at Drapchi prison, huge loads of clothes of dead prisoners from Chang Tsa-la-Kha were delivered.  There were enough winter jackets in there for half the prisoners of Drapchi.  I believe that the tortures and sufferings Tibetan political prisoners faced under China are comparable to those of Jews under Nazi Germany." 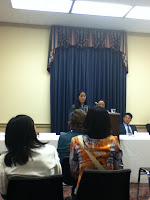 Ghan Lhamo gave her testimony on specific female political prisoners who suffered in the Laogai prisons.  One woman is called Phuntsok Zomkyi and was formally a Buddhist nun.  Between 30 and 40 nuns were arrested, including Lhamo, and received sentences between 4 and 8 years.  They were not allowed to go out, except for the occasional grave digging assignment and when she was finally released, Zomkyi fled to India.  "These female prisoners faced an extreme bout of torture and physical abuse in prisons and forced labor camps.  They were often tied up, handcuffed and thrown into seclusion cells.  A great number of female political prisoners were Buddhist nuns and were often sexually assaulted by the military police."

Since 2001, there have been 38 self-immolation by Tibetans as a direct protest to the authoritarian rule of the People's Republic of China.  The Laogai Foundation is an organization dedicated to gaining justice for these prisoners and spreading human rights around this part of the world.  They work through research and documentation to gain evidence against not only the Laogai prison system, but China's one-child policy and unauthorized organ harvesting as well.  Visit their website or the Laogai Museum in Washington, D.C. to learn more about this issue and what you can do to support these survivors and how to join their fight in eradicating human rights violations in China.
Posted by Elyse Elder at 8:44 AM