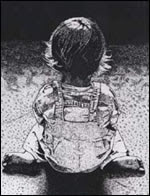 There are many issues of concern to the international community when it comes to children, all in serious need of attention. One of the most overlooked yet internationally prevalent, however, is that of human trafficking. Human trafficking is spreading more rapidly than ever before and effects nearly every country on the globe. According to the U.S. Department of State's Trafficking in Persons Report, some 600,000-800,000 persons are victims of trafficking each year, seven times more than in 1960. The victims are mostly woman and children who are often used as sex slaves, forced to endure harsh labor or even to fight wars. The numbers do not always include those who remain enslaved in their own countries, and many believe figures on trafficked persons are much higher than officially reported. It is widely believed that there are at least 2 million children used as slaves in the commercial sex industry worldwide. Prices for these modern day slaves are at an all time low, while profits remain high, leading some to believe the problem is worse now than during the days of legalized slavery.

Why are so many children being trafficked today, and where do they come from? Victims of child trafficking exist in every corner of the world, though many tend to come from Southeast Asia, the countries of the former Soviet Union, India, and South America. Much of this is due to the nature of our industrialized world. Victims are lured by traffickers who offer promises of a better life, work opportunities or a chance to live in a more democratic and free society. Some families, desperately poor, are willing sell one of their children as a sacrifice for the rest of the family. However the reality is a far cry from the promise of freedom, or an escape from poverty and hardship. Forced into prostitution or trained to kill in child armies, victims of sexual and psychological exploitation are literally robbed of their childhoods, a commodity that is rarely recovered.

One driver behind trafficking in children and young women is the global sex tourism industry, which thrives on foreign demand. If governments and societies do not enforce laws to protect children from pedophiles, many will continue to travel in search of sex with minors.

As traffickers and brothel owners rake in large profits, this seedy underbelly does not drive capitalism, but merely creates corruption, fuels the drug market, and other illegal and illicit activities.

The fight to curb sex tourism is also marred by heavy police corruption and a lack of enforcement of laws, including very low prosecution of the “Johns and Pimps,” or buyers and sellers of sex. If caught, the penalty is usually little more than a slap on the wrist, allowing the cycle to continue.