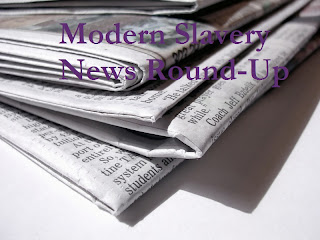 Three plead not guilty to holding mother, child captive in Ohio
Three people accused of enslaving a mentally disabled Ohio woman and her daughter, and beating the woman and stealing her pain medication, have pleaded not guilty. The defendants are charged with targeting and recruiting the woman in 2010 and holding her until October in a house in Ashland, 80 miles northeast of Columbus. Read More.

France Recognizes Modern Slavery as a crime.
In a landmark ruling on Thursday France recognized modern-day slavery as a new crime punishable by up to 30 years in jail, as it attempts to crack down on forced Slavery may be officially banned in France, but according to an anti-slavery committee there are still hundreds of cases, many of them unreported each year. On Thursday the French government finally officially recognized modern-day slavery as a crime, meaning that those who hold people against their will and make them work for free, sometimes sexually abusing them, will now face much heavier sentences than before.The Paris-based Committee Against Modern-Day Slavery says it receives more than 200 reports of enslavement in France every year, but the phenomenon is thought to be much more widespread as it often happens in private, within families.Read More.

Local Resident Draws Attention to Modern Slavery.
St. Hilaire resident Nicole Penner recently made a physical sacrifice to help others.“I couldn't do this without the Lord, that’s for sure,” she said. Penner and five other participants ran 200 miles from Dawson to Stillwater from June 22 through July 5. They ran as part of the Run Free Minnesota Team. They were running for Venture Projects in Southeast Asia. It’s focused on education, food security and faith development for refugees and oppressed people. Run Free addresses issues surrounding modern-Penner enjoyed making a physical sacrifice to help others. She said it makes more of a statement to make such a sacrifice for a charity and helps one get into close touch with her cause. She plans to do another Venture Projects event in the future once she has healed. Read More

More than 100 teens rescued in weekend sex-trafficking raids, FBI says
More than 100 teenagers — many of them children from broken homes — were rescued over the weekend in a sex-trafficking crackdown that swept more than 70 cities, the FBI said Monday. The youngest victim was 13 years old, the agency said. The sting resulted in the arrest of 159 “pimps” from San Francisco to Miami who were involved in the commercial exploitation of both adults and children, said Ronald Hosko, assistant director of the FBI’s criminal investigative division. It was the FBI’s largest action to date focusing on the recovery of sexually exploited children, and took law enforcement agencies to streets, motels, casinos and social media platforms, Hosko said. He said he hoped it would focus attention on sex trafficking, “this threat that robs us of our children.”  Read More Also see video here.
Posted by BTFF at 11:00 AM