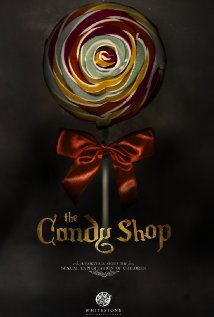 I walked into the office Monday morning ready to share with my boss, Executive Director Cassandra Clifford, a movie trailer I had seen the night before titled The Candy Shop. I literally knew nothing about it except what a friend had told me: "I found this creepy video on YouTube and it's about child sex trafficking."  Always an iffy situation, I was hesitant to check it out, but after seeing the trailer I decided it was worth sharing.  In lieu of answering emails, Cassandra and I settled in with our coffee to watch the 30 minute film.  What we saw was an eye-opening cinematic portal of domestic minor sex trafficking hidden beneath the cloak of a horror film.


With the support of Street Grace and 12Stone Church, director Brandon McCormick created a fairy tale parable to raise awareness to the issue that Georgia is a city with some of the highest numbers of child sexual exploitation in the world.  Doug Jones (Hellboy, Pans Labyrinth) plays a terrifying and twisted Willy Wonka-type character who lures young girls into his shop where he then uses his "machine" to turn them into lollipops for older men to buy and enjoy.  See the correlation?  It's up to young Jimmy, played by Mattie Liptack, to battle the shopkeeper and save the girls.

The film is only 30 minutes long, but it demonstrates new creative wave that is being employed to grab the public's attention to this tragedy that can be found not only in Georgia, but in every major urban center in America.  At least 300,000 children are being prostituted a year in the United States.  As the shop keeper says..."if there wasn't such a need, there wouldn't be so much business."  In the film, Jimmy has the opportunity to save most of the girls, but he finds there are some "lollipops" that just can't be turned back; they're just too broken.  While this film may look like a horror flick at first glance - the world of modern slavery is a true life horror story that never ends for it's victims and survivors- .

Step outside of yourself, dare to be uncomfortable.  Watch this short film and share with friends and family.  With so much evil right outside, in your city, there is no choice but to open your eyes.